Traveling from our lake home to Eureka Springs Arkansas for Clay’s family reunion, I didn’t read as usual nor snap photos from the window as I usually do.  Instead, I engaged my husband in spirited conversation, sang along to 80’s songs and car danced, making the time fly for the fun of it.

The jovial nature of it belied the feelings of trepidation just below my surface.  We were leaving our dogs in the care of a house sitter and although we met with her first and truly liked her, there is still the worry of leaving our babies in someone elses care, the fear of the unforeseen that could happen without me there to….well, fix it.

Too, there’s the anxiety of meeting much of Clay’s family that he himself hasn’t seen in 20 years or better.  I want to make a good impression, be an honor to my husband.  I’ve planned my wardrobe, setting out which shirts to couple with shorts or pants, shoes for each outfit and accessories.  It’s only for a few days and yet, it looks as though I’m moving!  Clay is aghast!  He cannot fathom why on earth I should need six pairs of shoes!

In honesty though, this is far better than any other trip we’ve made thus far.  I typically just pack everything I own.  Clay stares at my bags, arms akimbo and shaking his head.  “How am I supposed to know if I’ll feel like wearing pink or brown on any given day?  I can’t predict that!”   For a family reunion at a lake, I have over thought it and I’ve dicovered, overdressed.  Lesson learned, family reunions on a lake, bathing suit, cutoff Jean’s,  T’shirts.

Although we are still in the Ozark mountain range, it no longer seems the same.  Across the mountains, fingers of mist rise through the trees and gathers like clouds, hovering just above the peaks.  It’s magical, ethereal and neither of us realize the silence that had fallen between us in the awe.  I started at the sound of his voice when he finally spoke, “This is like Eden.”  A scripture came to mind, Gen 2:6 “But there went up a mist from the earth, and watered the whole face of the ground.”

The mist rising from the trees, gathering then spreading across the water.  Photo taken from our lodge.

Much of our time was spent getting acquainted,  reacquainted and connecting as a family.  Our evenings were spent listening to this family of storytellers weave the tales of days gone by, paying homage to those long past and handing them down to the new generation and we, committing them to memory for the days when we must recite them to our youngers.

Though we spent most of our time together, we were all encouraged to get out and explore.  “What’s the point of coming to Eureka Springs if you don’t see any of it?”  So we did.  We went to the historic city center, parked and walked it’s steep, curving hills, exploring the shops, springs and stopping for drinks and snacks. 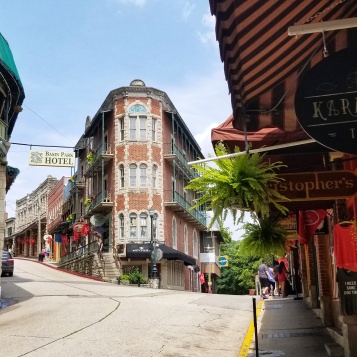 Historic main street is a quirky mixture of hippy culture, holistic health, history and art.  Though we chose to hike it, I was charmed by the trolleys as they passed by.  A painted staircase rises up to lend access between the upper and lower street levels.

Glancing up toward the upper street, I spied a house under repair and behold, the fabled Humpty Dumpty, and indeed, he does sit on a wall!

Eureka Springs, tucked within forested mountains, is home to the renowned Passion Play with a tall sculpture, Christ Of The Ozarks,  standing high upon a bluff  overlooking the mountains.  It is also home to the Crownthorn Chapel and a couple of  historic haunted hotel’s,  one of which I have longed to visit for nearly 20 yrs, The Crescent Hotel, but these I’ll save for my upcoming posts.

Over the 4 day reunion, we created memories, strengthened family bonds, beer flowed like wine, wine like water and water like Soda.  We laughed, shared stories, played games, barbequed and planned our future get togethers.  From the oldest of the Bailey Clan to the youngest, we celebrated the greatest gift of all….each other.

Clay and the youngest Bailey,  our grandson, Creedon.

The entire city is on the National Register of Historic Places as the Eureka Springs Historic District. Eureka Springs has been selected as one of America’s Distinctive Destinations by the National Trust for Historic Preservation. Eureka Springs was originally called “The Magic City” and later the “Stairstep Town” because of its mountainous terrain and the winding, up-and-down paths of its streets and walkways.

It is a tourist destination for its unique character as a Victorian resort village. The city has steep winding streets filled with Victorian-style cottages and manors. The historic commercial downtown of the city has an extensive streetscape of well-preserved Victorian buildings. The buildings are primarily constructed of local stone, built along streets that curve around the hills and rise and fall with the topography in a five-mile long loop. Some buildings have street-level entrances on more than one floor. The streets wind around the town, and no two intersect at a 90 degree angle; there are no traffic lights.

The European Americans also believed that the springs had healing powers. After the Europeans arrived, they described the waters of the springs as having magical powers. Dr. Alvah Jackson was credited in American history with locating the spring, and in 1856 claimed that the waters of Basin Spring had cured his eye ailments. Dr. Jackson established a hospital in a local cave during the Civil War and used the waters from Basin Spring to treat his patients. After the war, Jackson marketed the spring waters as “Dr. Jackson’s Eye Water”.

In 1879 Judge J.B. Saunders, a friend of Jackson, claimed that his crippling disease was cured by the spring waters. Saunders started promoting Eureka Springs to friends and family members across the state and created a boomtown. Within a period of little more than one year, the city expanded from a rural spa village to a major city. Within a short time in the late 19th century, Eureka Springs developed as a flourishing city, spa and tourist destination.