September’s heat can be a savage thing.  It steals the joy of summer, driving me to seek the cool darkness of inside.  Even with the lake in my back yard, I’d lost my desire to walk outside and leap into it.  It no longer offered relief but had itself become as miserable as a steamy bath.

We first ventured to Ha Ha Tonka Park earlier this summer with two of our granddaughters to see the tragic castle ruins   but in truth, it was a short trip as it was already much too hot.

October ushered in cool fall temperatures so we left for the park to explore some of the hiking trails.  We hiked a couple miles in the area between the castle and the quarry.  Most of the walk, we were silent, just taking in the nature around us.  We enjoyed it so much that we ran straight out Sunday afternnon to buy proper hiking boots.

Today, we decided to try a much more aggressive trail.  We Started heading toward The Devils Kitchen, heading only about halfway to a natural seawall.

Returning to our start point, we opted for the longest trail, Turkey Pen Hollow.  It’s a 7 mile rugged trail through thick forested and rocky mountain.  The sign stated that it’d take roughly 6.5 hours to complete.  We were wary about leaving the dogs at home so long but there was a cutoff offered that would shave 2 miles off of it, that we could take.

Is it possible that those old stories our parents used to tell us were true?  You know the ones…how they walked 10 miles to school, in the snow, up hill both ways?  I’d swear this trail was all up hill!

Clay was a good klick ahead of me as I often stopped to take pictures. He stopped ahead, waiting, then said, “You’ve got to tell me if you need to stop. You make me feel bad when I turn around and see you huffing like that!”  Well, actually, I was thinking, “OMG! He’s brought me to the wilderness to kill me!”  Lol

During our hike, I often found myself lost, writing stories in my head of witch hollows and fairy trees as we climbed stony paths on the sides of mountain, wound through forest and dry creek beds.  We found an area of boulder and bluff and decided to stop.  We sipped cool drinks, ate granola bars and re-applied bug repellent.

I was soaked and wishing I’d brought a towel to mop up my face.  The gnats were a menace and mosquitoes buzzed by but I reveled in the foliage and abundance of monarch butterflies. 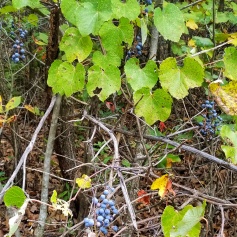 From time to time, we’d reach a high point or clearing where a blessed cool breeze would shoot through the trees and we’d stop, bathing in it’s bliss and grand views.

We couldn’t have asked for a more beautiful adventure.  We finally found the cutoff which would lead us back out.  The trail finally leveled out to a slight decline and I was able to catch my breath a bit.  We had kept a steady pace throughout.  In Fact,  we put the estimated 7 mile, 6.5 hour hike to shame.  No wonder we were soaked and out of breath.  We did 5 miles of the 7 in 3 hrs 4 min! Whoohoo!

Next time, we’ll do the full seven and maybe picnic at the Backpack camp.  Feeling accomplished today, stronger and more alive.