Having 2 of our granddaughters for the last week has kept us on our toes, finding ways to entertain both an 8 yr old and a 2 yr old.  Todays excursion brought us to an interesting find, Ha Ha Tonka State park.  With the 8 yr old, being a princess, we thought this would excite her to see the ruins of an old stone castle.

Delightful name, isn’t it? Quite a tale it tells indeed. I love that it still stands…the skeletal remains of a dead mans dream.  A haunting sight in the fading light of evening.  I can but imagine the imagery at night…that long wooded walk to reach the bluff, it’s beautiful bones awashed in moonlight and what phantoms wander there.

In 1905, Robert McClure Snyder Sr, a wealthy businessman,  dreamt of building a castle home in the heart of Missouri.  He purchased 3000 acres of land in Ha Ha Tonka State Park.  Snyder even imported stone masons from Europe to insure the stones for the castle were cut correctly from a quarry below where the ruins stand today. 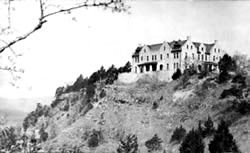 “Here I will spend my leisure, secure from the worries of business and the excitement of city life. I will fish and loaf and explore the caves of these hills, with no fear of intrusion.”

The construction of the castle was under way in 1906 when Robert was tragically killed in one of Missouri’s first auto accidents but his dream lived on.  His sons, Robert Jr., LeRoy, and Kenneth, continued the work and were able to complete it by 1920.

Robert Jr. moved into the castle.  By 1937, at the time of Robert Snyder, Jr’s death, the depression, and  court litigations in a struggle for land and water control with Union electric had depleted the family fortune and the surviving brothers were forced to take other financial steps with the mansion.  Leasing the building to a woman named Mrs. Ellis; she operated the historic building as a hotel for the next several years.

However, in 1942, tragedy struck the castle again when sparks from one of several fireplaces ignited the roof.  Within hours, the mansion was gutted as well as the nearby carriage house.  All that remained was the skeletal outside walls of the mansion and the nearby water tower.  Again, the mansion was abandoned, sitting silently upon the cliff overlooking Ha Ha Tonka Spring and the Lake of the Ozarks for the next 36 years.

The state purchased the Castle and grounds in  1978 and has worked to preserve the crumbling walls of Snyder’s dream home.

Today the ruins stand as a stunning landmark in the state park.  Visitors can now explore the bones of the tragic castle that brought down the Snyder kingdom.

Long before Robert Snyder built his stone castle high upon the bluffs of the Ozarks; the area was home to the Osage, Cherokee and other Native American Indian tribes.  Many early explorers traveled through the area including Daniel Boone and his son Nathan, and later, Zebulon Pike passed nearby on his way to explore the West.

Comprising approximately 3,000 acres on the Niangua Arm of the Lake of the Ozarks, the park offers an array of geographic formations, caves, streams, natural bridges and gushing natural springs in addition to the ruins of the Ha Ha Tonka Castle.

15 miles of hiking Trails and boardwalks provide easy access for visitors to experience the park’s many tunnels, caverns, springs, and sinkholes.  More than 400 species of plants have been recorded at the park, with wildflower displays changing throughout the summer.

During our exploration, we also hiked down a mountain path beneath a natural land bridge.

View from the back of the castle…

If your journey ever leads you towards this path, please do stop by and enjoy the wonder of one of Missouri’s many treasures, The tragic Castle and Ha Ha Tonka State Park.