10yrs ago today marks the most terrifying day of my life.  It also marks the witness of an unbelievable miracle and the receipt of extreme grace.  Reposting this today in honor and celebration of 10yrs,  every moment a gift and the absolute glory of God.  Happy birthday, Ezra. 💕

July 31, 2010
This would be a day like no other…
Aside from having company in the house, it was an ordinary Saturday. Clay was in the Kitchen cooking breakfast and I was standing at the counter when our 26 week pregnant daughter, Krista emerged from her room. She leaned heavily against the bar, heaving breath as though she couldn’t catch it.
“Mom, I can’t breathe. I’m going to the ER.”
I had noticed how badly her feet had begun swelling, although she’d called her doctor who said it was normal, I insisted she call again and again. each time, she was told it was normal and they refused to see her until her appointment the following month.

I instructed her husband to call immediately when they got there.
Lisa, our daughter in law, had gotten up and was busy dressing baby Phoenix and Clay had just handed me a plate when his phone rang. The fork clutched in my hand, hovered above the plate, came crashing down as I shot to my feet at the distress in his voice….His eyes wide with panic as he turned to me, “THEY’RE TAKING THE BABY!”

How we all got together, dressed, loaded and to the hospital so quickly defies explanation but we did.  I vaguely recall the silence of the ride. No one knew what to say.  In the midst of my own great sadness were the prayers, prayers for my daughter’s life, prayers for the words to comfort her in her loss and grief.
I remember walking into the hospital, offended at the beauty of a day that felt like it should be gloomy.  Her husband met us in the foyer. Her liver and kidneys were failing and she wanted to see me.

As I stepped into the room where they were prepping her for surgery, she could see my every emotion playing out on my face.  I have no guile at all.  My every thought and emotion plays out for all to see.  “DON’T! Don’t Mom! If you break down, I’m going to lose it too!”  I nodded, smiling weakly, kissed her and told her I love her before they whisked her away.
We passed the time contacting family members and fielding calls.  Our son grabbed an emergency flight and was on his way.

Finally a nurse came out.  She said that as soon as they were able to get Krista stabilized they’d be transporting her to Baptist Hospital…AND the baby was about to transport there now!!!! We were all in shock, all of us saying the same thing, “the baby????”
She smiled, “Yes. Do you want to see him before they leave?”

I couldn’t believe my ears!  The fragile dam of my reserve finally burst and tears poured down my face as I looked upon my grandson, the tiniest of things, unbelievably tiny, 1 lb 10 oz, all wrapped in plastic to retain his body heat.  As they wheeled him away, the nurse ran to me, “I have his armband, would you like it?” The thing in my palm so small it’d barely fit over the tip of my finger!

Though his mom wouldn’t be stable enough to see him for 4 days, we would scrub with brush, clean nails with a pick, scrub again, glove up, don face masks and go in to pray for Ezra, then go to her floor so she could see at least a picture.  From day one and every day thereafter, one of us would be in charge of whispering the 91st psalm to him.  Each day I prayed the Lord be with him so he would never feel alone inside that incubator.

It was on the 7th day that the real ride began.  I woke up early that morning.  As I crept down the hall trying not to disturb any sleepers.  I heard an odd sound, growing as I neared my daughter’s room…faint words swallowed by huge wracking sobs.  I barely rapped on before throwing open the door.  My daughter standing in the center of the room with phone in her hand.  There’s nothing else in the world so recognizable on a primal level as the gut wrenching, heart breaking sound of a mother’s grief.
The hospital… Ezra’s bowels had perforated. They needed to get him into surgery right away however, they said he could not survive it. 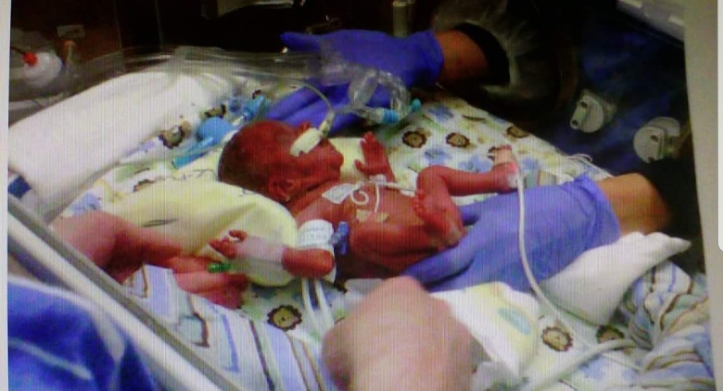 Again we rushed to the hospital and made it in time to pray over him as a family and for his doctors.  Again, against all odds, he survived.
Word of Ezra seemed to spread like wildfire, throughout our family near and far, through their friends, churches to all of those friends to more until we were receiving word, prayer blankets, cards… from across the country to foreign countries, from every denomination, age, gender, race, all coming together as one body to pray for this one small life.

He would have a long road ahead, would have to have surgery on his heart, 3rd stage brain bleed, etc.  5 months in the NICU.  One side of his vocal cords were paralyzed from being intubated for so long.  They said he’d never talk but he does. How precious are the words, “I love you, Mimi!” , eye surgeries, picc lines, feeding tubes.  He has seizures.  He has Cerebral palsy… foot surgeries and they basically cut off his legs at the hip, rotated and reattached with screws, a femoral spike and now  had to  have the metal removed. 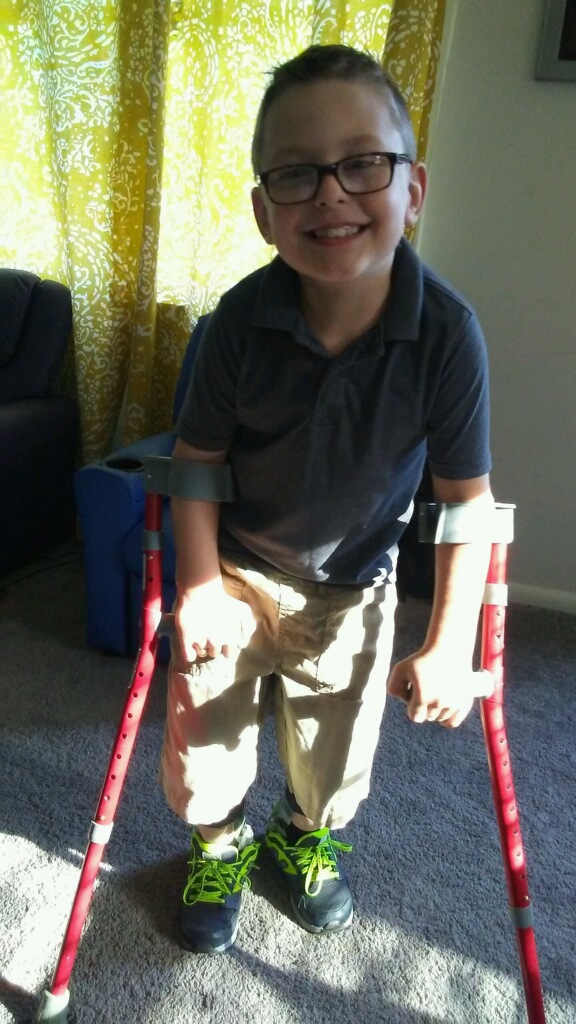 At 7 yrs old and only  after all of this was the first time he was able to walk at all.  He’s been through more in his small life than most will in a lifetime, yet, he is the sweetest, kindest soul you’ll ever meet, always smiling, loves hugs and kisses and always telling everyone that he loves them.  His little life having been placed in the hand of the Lord, and marinated in prayer from before his first breath, has carried him all this way.

COPYRIGHT ALERT
©Laura M. Bailey, All the shoes I wear & writing down the Bones, 1990–Present. Unauthorized use and/or duplication of this material without express and written permission from this site’s author and/or owner is strictly prohibited. Excerpts and links may be used, provided that full and clear credit is given to Laura M. Bailey with appropriate and specific direction to the original content.